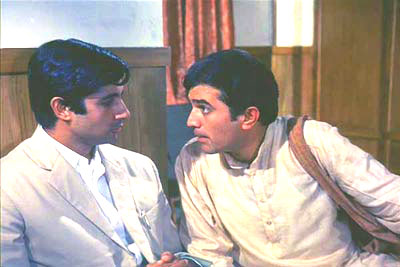 Anyone who knows me will vouch for the fact that I am not a film buff. Films are so long  and I just do not get the whole ‘The End’ bit.

So this chain of events took place:-

It started with me really getting into old hindi songs in the past couple of years. I heard them growing up, but learnt to rightly tune them out as all things the parents were into- now I’m completely smitten.

I then watched ‘I Cant Think Straight‘ which has Lisa Ray playing a bisexual Arabic woman in love with a ‘desi’ Brit girl Sheetal Sheth (very cute and brown).

Then, I have this list of songs that I’m meant to learn.

so one day I’m  humming a song from said list and my father piped up from across the room “DOYOUKNOWWHATMOVIETHISSONGISFROM?””

My father is adorable. He was a tough-guy in his youth and now he has this halo of white-grey hair behind his head. I of course rolled my eyes and snorted, ‘Yaidd’sfrom themovie wheredatguy diesintheend”.

Dad  rose to the occasion “NOO!ITSABOUTHISLOVEFORLIFE.HELOVESLIFEANDFIGHTSFORIT.-

He was seriously frothing by now.

I ofcourse was unaware  that I’d put my foot because I didn’t know how awesome the film was.

Parental playing aside- my father has the best taste in films, he’s a seriously classy guy. Which is probably why we weren’t allowed to watch Hindi movies or any television for that matter growing up. The 80’s and 90’s were pretty dismal decades for Hindi cinema. The only movies I’ve seen as a kid were old black and white one’s or foreign films with Olivia De Havilland or Errol Flynn ‘, or good old Guru Dutt movies or Mughal -E -Azam.

Back to the chain.  After the talk about Anand, within a matter of days I read in the newspaper that Lisa Ray had been diagnosed with a kind of awful Cancer and all these things ran through my head and fit, like pieces of a puzzle.

So I went back to my list and worked out the song. My cousin and her daughter helped my with lyrics and I transposed the music manually on paper.

Here is my version

Lisa Ray this is for you.

And a link to Mukesh’s original

ps: the father is completely right, I watched ‘Anand’ one afternoon alone  and wept from start to finish.